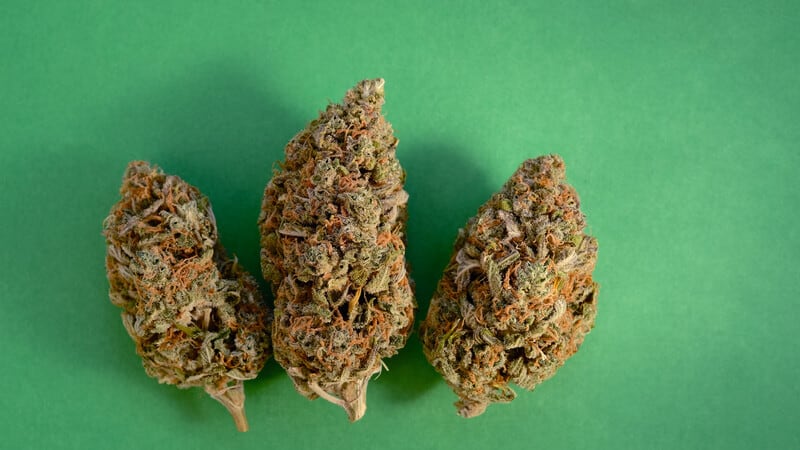 The Apple Mints strain offers quite a bit in terms of flavors. There are consumers that enjoy citrus strains while others want strains that taste like grape. Finding a strain that serves as a sweet treat can be a zero-calorie way to make your mouth water.

New strains are being bred daily which is why Cannabis Training university continues to bring you top strain reviews. Below will highlight what you need to know about the Apple Mints strain.

Is Apple Mints strain an Indica or Sativa strain?

Apple Mints is an Indica-dominant hybrid of the potent Apple Fritter and Sherbet. The strain can turn you into the classic lazy stoner that hasn’t moved from the couch in hours. Reserve this bud for late at night when there is nothing left to do but sleep and watch some TV shows that are streaming.

Apple Fritter can be a massive surprise when it comes to potency with up to 28 percent THC. The strain will give you the munchies and relax you to the point of sedation. People suffering from insomnia might find that they sleep peacefully after the consumption of this strain.

Sherbet strain was bred for its incredible creamy and fruity flavors. Expect to have a relaxing and happy high but you will want to come back for more due to the flavor. With up to 19 percent THC, it can be very easy to overconsume due to loving the taste of the strain.

Apple Mints can be grown relatively easily indoors or outdoors. Indoors you can expect up to an ounce per square foot. Outdoors a grower is going to see up to a pound per plant which is a healthy yield.

Yields are going to differ drastically depending on the strain that is being grown. The genetics of the seeds will make an impact but the strain is a much more important factor. Take the time to research any strain you are thinking of growing to see if you can create the ideal growing environment indoors or outdoors.

The flowering phase of Apple Mints is going to last 45 to 55 days.

Setting up an ideal environment for strains truly depends on the strains you are growing. Some strains do well in humidity while others are very susceptible to mold and mildew.

Apple Mints has a THC content of 22 to 25 percent. No flower you find of this strain is going to be for beginners due to the immense potency. Working your way up to potent strains as a stoner is important to avoid paranoia from indulging just a bit too much.

Flavor And Aroma Of The Apple Mints Strain

The flavor of Apple Mints will be of diesel and spicy vanilla. There is a beautiful aroma and flavor of mints as well. The terps in this strain are Caryophyllene, Phellandrene, and Limonene.

Caryophyllene is a very powerful terpene in terms of relieving pain and inflammation. The common terpene has a spicy taste that is noticeable. Strains with this terpene include Girl Scout Cookies and Candyland.

Phellandrene has been shown to increase energy levels and reduce pain simultaneously. The terp is responsible for the mint flavor in Apple Mints. Gushers and Jack Frost both contain this secondary terpene.

Limonene also is accompanied by CBD in a number of strains which results in a boost in energy. The terp has the flavor of lemons and can help reduce anxiety. Strains with this terpene are Banana OG and Berry White.

Finding strains that you can enjoy during the day or night can be important. A nice treat to toke on that comes with a nice buzz is a perfect pick-me-up for any cannabis enthusiast. Look into the flavors of strains you like then research the effects that you should expect.

Apple Mints is going to prove very difficult to find seeds of. The rarity of the parent strains could be the culprit although it seems like Sherbet is grown around the world. Seed banks that do have these seeds cannot legally send them in the mail due to federal law.

Finding seeds or cuttings of this strain might require asking a grower to breed the strain for you. Take the time to exhaust all options if you find that these seeds are more than difficult to come by.

Apple Mints is going to be relatively expensive when compared to other strains. You can expect to pay up to $65 per 1/8th of an ounce. For a full oz. you will be spending $350 to $360.

Marijuana is always going to differ by the state in terms of price. California has massive taxes on marijuana while states like Oregon have some of the most affordable weed on the market. Shop around to get the most out of your budget for weed products for the month.

Marijuana is changing the way that some people medicate for various conditions. The plant appeals to people as it is a natural remedy rather than dealing with compounds created in a lab. Apple Mints can help with the following medical conditions:

Apple Mints is not going to have a booming CBD content so it is wise to supplement CBD elsewhere. There is a multitude of products on the market but you will have to sift through some companies that do not put a focus on the quality of their ingredients.

Apple Mints is a strain that you are going to want to try in the near future. Growing this strain can be challenging due to the lack of information on it.