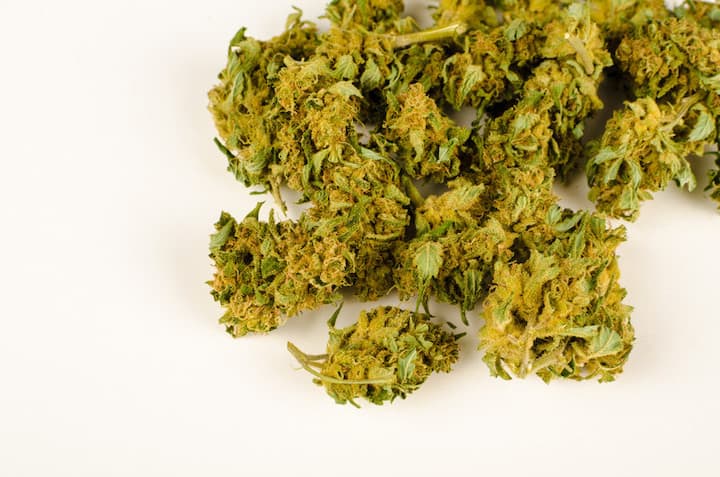 When cannabis strains become widely popular, specific phenotypes can climb the popularity ranks as well, as you’ll learn in this Thin Mint strain review. Thin Mint GSC isn’t a specific strain itself, it is only a phenotype or specific cutting of Girl Scout Cookies, one of the most popular marijuana strains in the last few years.

With such rampant popularity of GSC, many cannabis breeders aim to improve on the strain and capitalize on the massive amount of fans. The Thin Mint Cookies phenotype is one of the more well-known cuts of GSC and has become commonplace on the west coast.

Thin Mint strain is a phenotype of GSC, which is a cross of OG Kush and Durban Poison.

OG Kush is a legendary cannabis strain that has been used as a parent-strain for many popular west coast cannabis varieties. There are countless phenotypes of OG Kush itself, including Tahoe OG, SFV OG, and Ghost OG.

Durban Poison is a sweet-smelling sativa that produces buds that boost creativity and energy levels in consumers. It’s a favorite of concentrate producers due to its resin content.

The resulting child-strain known as Girl Scout Cookies is a balanced hybrid and contains features of both indica and sativa.

Thin Mints itself is balanced as well. It can hit the mind and body hard with consumers noting its strong psychoactive effects.

Prospective growers can get their hands on Thin Mints through seed producers like Elev8 Seeds.

Simply buying GSC seeds and hoping that it is from the Thin Mint Girl Scout Cookies cut is a bad idea. There are too many phenotypes on the market so if you want Thin Mint GSC, you need to ensure the genetics are correct.

If Thin Mints wasn’t popular enough as-is, it has also been used to parent some potent marijuana strains as well. Both Gelato and Lava Cake come from the Thin Mint lineage.

Gelato, also called Larry Bird, is a relaxing and euphoric hybrid made by crossing Thin Mint GSC and Sunset Sherbert.

Lava Cake is known for its doughy, dessert-like essence and also produces a deep sense of relaxation.

Along with Platinum GSC, Thin Mint Girl Scout Cookies has become a household name for fans of GSC.

Thin Mint strain can be grown indoors and outdoors. Growers can expect to harvest around 1-3 ounces per square foot of plant. Indoor growers will harvest more towards the lower end of the range while outdoor growers will get more.

It’s a medium-difficulty cultivar of cannabis, but it can be grown by everyone, including beginners if the growing conditions are optimal.

Thin Mint takes around 70-80 days during the flowering period. Forest green and royal purple intertwine within the buds, which are covered in a thick layer of frosty trichomes.

The purple hues will come out best if the plants are exposed to lower than normal temperatures during the early stages of flowering.

This phenotype of GSC is known for its high psychoactivity, so harvesting when the THC levels are the highest is the best way to ensure you have the best Thin Mint Cookies possible.

THC levels are at their peak when the trichomes are milky-white in color. Turning amber means a slow drop in THC as time passes.

While you can find some Thin Mints testing in the mid to high teens of THC percentage, it’s not uncommon to find Thin Mints reaching 24-28% THC.

Many avid cannabis users tout the psychoactive traits of Thin Mint, so beginners and those with a low tolerance for THC should tread lightly.

The high is a good balance between mental and physical, inducing a state of euphoria and relaxation. It won’t necessarily put you to sleep and induce couch-lock like a typical indica however. Consumers may also experience a boost in imagination and creativity when using Thin Mint GSC.

The doughy and sweet aroma and flavor that GSC is known for are still present in Thin Mints. However, the presence of aromatic mint in its essence is probably the leading cause for the naming of this phenotype.

Thin Mints is rich in terpenes Caryophyllene, Limonene, and Humulene.

Caryophyllene adds a peppery essence when present and is good for fighting the effects of inflammation.

Limonene promotes the citrus essence when found in plants and is good for treating anxiety and depression.

Humulene is found in hops and woods and is also known to fight inflammation.

Since inflammation is such a leading factor in many health conditions and diseases, it’s no surprise that Thin Mint is touted as a leading ganja strain for medicinal use.

While there are plenty of recreational users of cannabis who love Thin Mint Cookies, medicinal uses are abundant with this cannabis. Here are a few of the conditions that Thin Mint can improve:

Of all the popular cannabis strains on the market right now, very few have such potential as a recreational aid and as a medicine. This strain is perfect for both situations.

This is probably why it is so popular in both markets! Thin Mint may overtake the regular-old GSC that is flooded on the market right now, simply because the quality is high and the effects are pronounced.

Girl Scout Cookies will go down as one of the top marijuana strains of the 2010s. With phenotypes of GSC rising in popularity and production, Thin Mint GSC and others, like Platinum GSC, will continue the legacy of this uber-popular cannabis strain.

Are you interested in everything involving growing and breeding cannabis? Our grower’s training program will set you up for success and help you grow medicinal marijuana of the utmost quality.