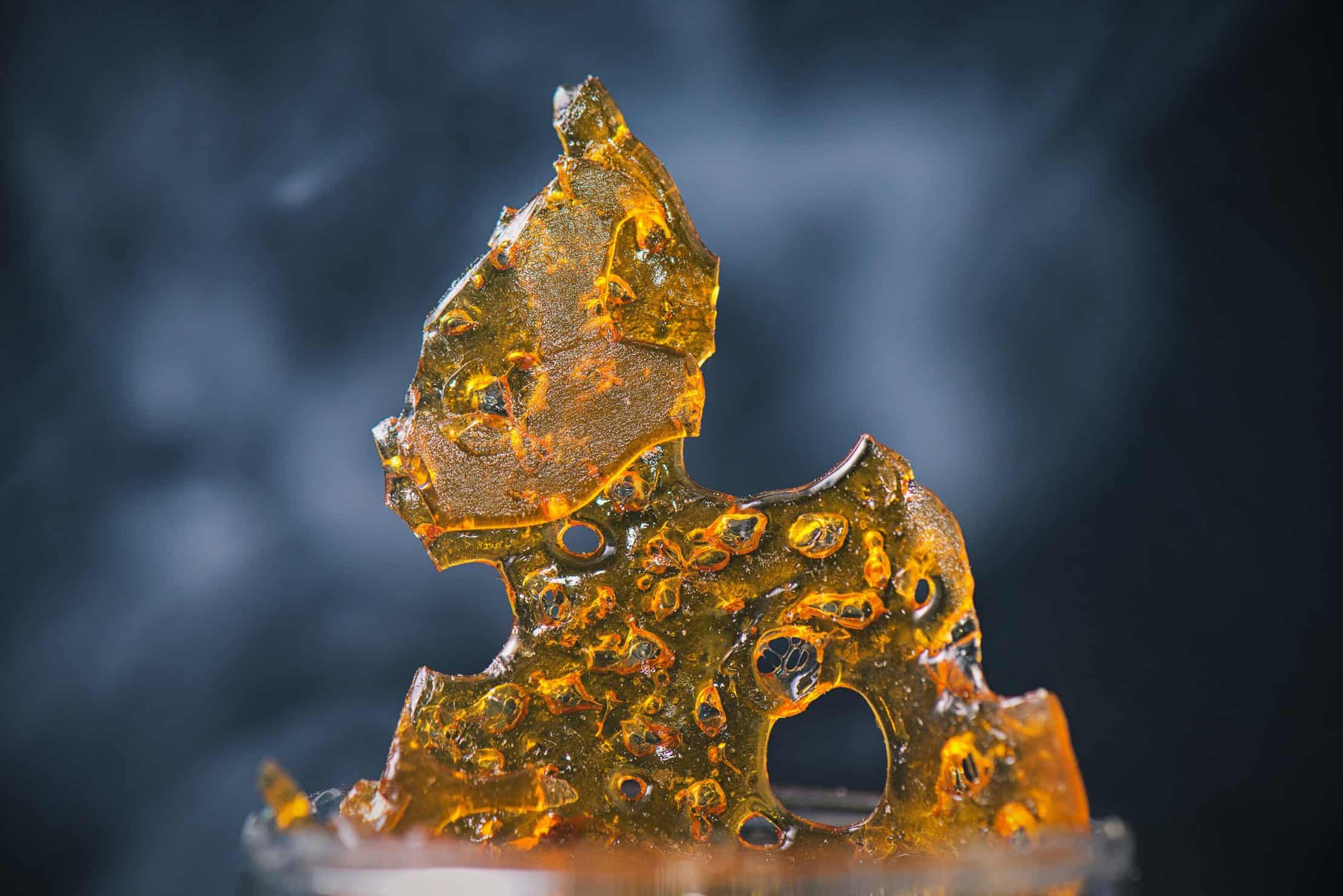 Cannabis concentrates are one of the fastest growing markets in the cannabis space. These potent products pack a big punch and are usually vaped in a dab rig or other device rather than smoked—unlike hashish, a concentrate known to generations of cannabis enthusiasts. Besides hash, hash oil is another powerful concentrate that’s been around for decades.

Hash and hash oil remain popular concentrate products in the emerging cannabis industry, but now there are a plethora of newer, more potent, and interesting concentrates from which to choose. This variety of products often borrow names to describe their consistency or form.

In addition to well-known hash and hash oil, concentrates in the modern industry are marketed as shatter, wax, crumble, taffy, rosin, batter, and moon rocks.

Cannabis concentrates are manufactured in a variety of ways. Several extraction methods exist, some reserved for producing specific products, but all of them intended to extract THC—and sometimes CBD—into a concentrated form.

The methods used to create various concentrates include a variety of substances and processes, some of them using harsh solvents like propane and butane, as well as methods using water, heat, and CO2.

Distillate concentrates are also available today, and these are usually extremely pure and high in THC. The resulting products are then referred to as “concentrates” or “extracts.” In today’s industry, many concentrates are strain-specific, so the buyer knows exactly which plant strain the concentrate came from, which provides a good indication of its effects.

To learn more about current cannabis concentrates, let’s examine and define what you may find in a typical dispensary. We’ll begin with a couple of historically significant concentrates and then move to the most common of the more recent products.

Hashish, or “hash” as it is commonly called, is the oldest cannabis concentrate and has a history of use that spans thousands of years. The countries of origin for hash production are Nepal, India, Pakistan, and Afghanistan, and it most commonly comes from indica plants, so the effect is quite relaxing and sedative.

The original form of hash was “finger hash,” which is created at the time cannabis plants are harvested by rubbing human hands on the sticky, trichome-covered buds to collect a thick, sticky, sap-like residue that the plant harvesters roll into balls rich in THC (commonly 40-50 percent).

The hash is literally a collection of trichomes stuck together with trace amounts of flower. This concentrated form of tetrahydrocannabinol was potent and compact, which made it easy to transport.

The hash commonly imported during the ’70s and ’80s came in a variety of colors, and hash slabs would sometimes carry a Middle Eastern stamp, which provided indications of its country of origin.

This hash came in a variety of colors, including blond, red, and black. The color variations were due to the types of cannabis plants used, the manner in which it was collected, as well as the color of their original packaging—particularly the red and blond varieties.

The hash most commonly found today—and a staple of the cannabis industry—is “bubble hash,” made from ice water and cannabis flowers. Creating bubble hash involves a process where a series of collection bags with varying levels of minute filtration are arranged, one within another, with the filtration bag having the largest-micron filter being the first bag and the smallest, most-minute filter the last.

Either dried flower or freshly harvested flower will work to make bubble hash. When using fresh flower, the resulting hash is sometimes referred to as “live hash.” Some people believe that the live hash terpene experience—the aroma and flavor of the hash—is superior to that of hash created with dried flower.

To make the hash, a bucket or large vessel containing the series of collection bags fits snuggly like a trash bag within a trash can filled with ice water. Then, the flower—either dried or fresh—is put in the ice water (some people choose to freeze the flower prior to placing it in the ice water).

Once allowed to sit for an hour or so, the water is agitated with a heavy spoon or paddle (some people use an electric cake mixer, using extreme caution not to let it get it fully emerged in water, for obvious reasons). The water is mixed and agitated fully before being allowed to settle once again. This process allows the trichomes on the flowers to become nearly frozen, which causes them to drop off and collect at the bottom of the bag.

When removing the first couple of bags, the plant material is strained out. The remaining bags include residue that is collected and dried, resulting in hash of varying purity depending on which bag it came from.

Bubble hash remains one of the easiest and safest cannabis concentrates to make. The resulting hash can either be smoked by itself or combined with flower in a joint or as a bowl topper. It can also be used in making a tarantula joint. It adds a potent kick when smoked.

Hash oil is a popular cannabis concentrate to consume on its own or to make other concentrates. It’s also used to make edibles. The color of the oil can vary depending on the extraction method or purity, but most commonly it’s a golden amber color. Hash oil is made with either cannabis flower or hash.

Making hash oil involves using solvent extraction methods, utilizing one of a wide variety of solvents, including dichloromethane, chloroform, petroleum ether, ethanol, butane, and methanol, among others. The potency and versatility of this concentrate makes it very popular, which makes hash oil one of the most commonly made extracts.

Like bubble hash, rosin is a cannabis concentrate that doesn’t include the use of solvents. Like hash oil, you can make rosin with either cannabis flowers or hash. From this, the person doing the extraction employs heat and pressure to create a rich, potent hash oil.

Most of the rosin made for sale in dispensaries is produced in large quantities using sophisticated industrial equipment, but many people make it at home using simple household devices and materials. Many people favor rosin because it doesn’t use harsh solvents, which result in an extract that contains zero residual solvents.

You can create homemade rosin with an adjustable flat iron or other heat press, cannabis flower or hash, nonstick parchment paper cut into 4- by 8-inch strips, a collection device (dab tool; small, sharp knife; or razor blade), and pieces of 25u micron screen. By wrapping .25- to .50-gram pieces of flower or piece of hash in a 25u micron screen and pressing it flat, you then place it on a piece of parchment paper and fold the paper over, enveloping the screen and its contents.

Then, you apply pressure for 3 to 5 second with the flat iron. Carefully apply firm pressure for 4 to 6 seconds, then unfold the parchment paper and remove the screen and its contents, being careful to leave all of the rosin oil on the paper, which you then scrape off and gather with the collection tool. Repeat this process until you have the desired amount of rosin.

Moon rocks fall into the cannabis concentrates category and are easy to make if you have the necessary ingredients. They consist of prime cannabis flowers, hash oil, and kief (the THC-rich, trichome-laden particles that collect in the bottom trap of many cannabis grinders).

To create moon rocks, you take a cannabis flower and cover it in cannabis oil, making sure you completely saturate the flower. Then, you roll the oily flower in kief until it has a thick coating. The resulting coated flowers are known in the industry as moon rocks, although some companies opt to create their own names for this product.

Moon rocks are smoked, usually in a pipe. While the hash oil may result in some initial bubbling, the moon rocks will soon smoke consistently and result in a potent rush.

The overall effect will depend largely on the type of flower used (indica or sativa), as well as the sour material used to create the oil and kief. Moon rocks are fun to both consume and create, and they make a nice change of pace over more traditional concentrates.

The popular concentrates shatter and wax are usually made with harsh solvents like butane. These products are best created in modern MIP facilities with established safety measures in practice.

While shatter, wax, and other concentrates can be made at home, the process can be dangerous because of the solvents and heat used. Because of the risk and potential danger with the home-creation process, we will not go into detail about it here, but suffice it to say that these extracts pack a powerful punch and are definitely worthy of your attention if you’re looking for an intense cannabis experience.

Shatter and wax—as well as other cannabis concentrates like batter, crumble, and taffy—are quite similar in the production, but the consistency of each is quite different, which results in the variety of names for them.

Unlike hash and moon rocks (and sometimes hash oil), shatter and wax are consumed using a dab rig (a bong-like apparatus used for concentrates) or another dabbing device. A hand-held blow torch is the most common method of heating the dab nail to a searing heat level. When a piece of shatter or wax meets the dab nail, usually using a dab tool to prevent unintentional burns to the fingers, a thick vapor results that the consumer inhales into his or her lungs.

Consuming cannabis in this manner is known as dabbing, and a single dab is usually all that’s necessary to achieve a very elevated cannabis state of mind. Although some seasoned dab consumers may enjoy a second or even third dab, more is not usually necessary.

Learn how to process cannabis-infused products when you enroll in Cannabis Training University, the leading marijuana school since 2009.